History of the Minesweeper


The origin of the Minesweeper

The Minesweeper game has its origins in the first computer video games in the 1960s and 1970s, at a time when computers were located in research laboratories or in big business. The first of his ancestors is Jerimac Ratliff's Cube game. This type of game quickly became popular in the "puzzle" game genre of the 1980s with securities such as Mined-Out (Quicksilva, 1983) or Yomp (Virgin Interactive, 1983). Cube was succeeded by Relentless Logic or Rlogic from Conway, Hong and Smith for the MS-DOS platform as early as 1985: but a number of differences remain :

The game mechanisms of the Minesweeper are included in a spectrum of other games e.g. the computer game Mole Control (developed by Remode) where the goal is to clean up a village of an explosive mole infestation.

The birth of the game 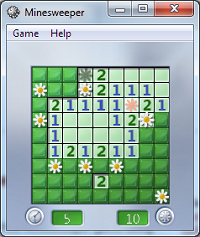 The best known version of the Minesweeper (and the one present on this site) was distributed by Microsoft as part of Windows 3.0, then Windows 95 and Windows XP.

The Minesweeper game offered Windows users something different from the other popular Solitaire game, mainly the fact that it was less obvious and required a lower degree of concentration, allowing users to spend hours discovering mines without putting their brains under too much pressure.

Unfortunately from Windows 8 onwards, the game no longer integrates automatically with Microsoft Windows.

Nowadays, there are several variations of the Minesweeper game While some remain faithful to the Windows version, others are more improved.

The classic version counts the number of seconds that have elapsed and allows you to put a flag on the squares that could potentially hide a mine.

. The most modern versions sometimes add a time constraint or several mines in the same box. You then have a limited amount of time to finish the game without detonating a mine.

Nowadays you can find the mine clearance game with nice graphics and animations.


Back to the Minesweeper